I'm about to explode with awesomeness!

If I were the kind of person who used the term "da bomb" I would use it now to say that someone better call da bomb squad because the awesomeness explosion is soooo da bomb.

However, I am not the kind of person to use that term. Lucky for you.

Nonetheless, this is how it went down.

I saw a recipe that mentioned rosemary and pear. I didn't have any of the ingredients for said recipe. Defeat. But then, I looked at defeat in the face and created this gift from the Gods. As I finished, I heard that churchy "ahhhh, ahhh, ahhh-ahhh" thing that happens when something amazing happens. Probably because something amazing did happen...also I was actually making that sound, as was my Bestest, Kelly. We sat and photographed this triumph and then we sat and enjoyed my efforts. Ok, our efforts, since she brought the champagne.

This is the story... 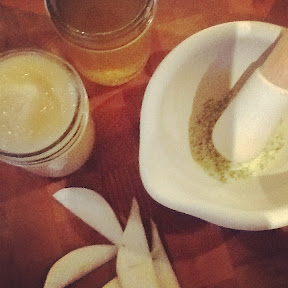 In the beginning there was pear, rosemary, raw sugar, water. And it boiled, and was strained, and cooled. Then, purée was created, with a little lemon juice and water, and it was good. This is when things got nuts. I made a pear garnish, simple sliced pear. And then, THEN, I made a garnish for this garnish. I'll let you readjust after what's I'm sure was a moment of jumping up and screaming, "What!?! Garnish for a garnish? Shut the front door!". Yes, it's true. I took minced rosemary, vanilla sugar and lemon rimming sugar and mortar and pestled the crap of it. Then I dipped the edge if the pear in the aforementioned syrup and then dipped it in the sugar brilliance. I know. Crazy. Garnish Inception.

So, pear purée in bottom of glass, topped with some shaken pear vodka and pear-rosemary syrup and then topped AGAIN with champagne. Garnish, or garnish-garnish, as it were.

Now, gaze upon this creation and call it good. 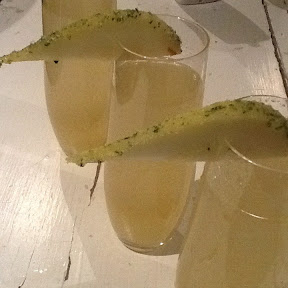 I must leave and enjoy this miraculous gift. I just had to share...with myself, so that I can remember how to do this again when the hour is happy.

As a side note, my friend, we'll call her "Relly", but certainly not my previously mentioned Bestie, Kelly, said, "I hate Jesus people" while we sang churchy praises to our cocktails. The end.

Back to the future!!! Stuff Yella actually does - October Edition

There was a plan, once upon a time, to blog and blog a lot. This plan never came to fruition. There are many reasons why, none of which are remotely entertaining, but the stupid app that I use to blog stopped working so that posed the biggest problem. Also that whole "having a baby" thing probably didn't help. Those suckers are a time-suck. So, here's a blog I wrote, attempted to publish and then was deceived by technology. I couldn't let it go to waste. That goes against reduce, reuse, recycle mantra. I'll write a new blog one day. I'm pretty sure I'll need something to do when I'm an Empty Nester. Close your eyes and imagine yourself in a simpler, less complicated time, a time when Kim Kardashian was still married. Let this magical blog whisk you away.....wheeeeee! 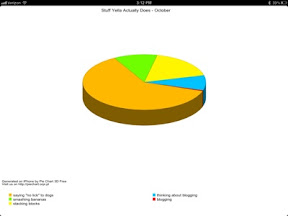 Totally janking this pie chart idea from Beth at Suburban Matron to help explain how productive my life is. That about sums it up. Also, this marks the beginning of me blogging daily for at least a month. Well, let's say until Thanksgiving, because let's be honest, I'm going to be so full of fried turkey that I wont be blogging unless some sort of dessert is being held hostage and the ransom is blogging. There will most likely be lots of interesting things to blog about in the next month. Grocery shopping. Wind in Vegas. Putting the baby down for a nap. Sweet. So, get excited you crazy kids (I'm quite aware that there are no kids, crazy or otherwise, reading this, just as there are no adults reading this. Ahhhh...narcissistic indulgent blog, I love you). Just think. The next time I go a day without blogging there will be turkey frying in a huge pot of oil in my backyard. Yay Pilgrims!

Posted by yelladoesstuff at 10:55 AM No comments:

yelladoesstuff
Hi! I'm Danielle. My friends call me Yella. I do stuff. I've got a baby. I've got a hubby. I'm doing a whole lot of livin'. L-I-V-I-N. This is the blog.